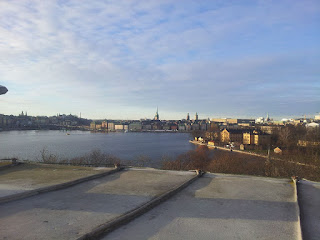 The weather has been variable in Stockholm ranging from warm and rainy to chilly and frosty. It was only the beginning of December but the staff of Department of Archaeology and Ancient History came for a Christmas conference. The conference is almost traditional, since it has run with the same format now for three years. During these occasions we hear papers from the new members of the department or about new projects old members have received money for. This year the projects had a geographical breath from Egypt and Central Asia to Stockholm and its archipelago. This was very fitting, since we were having the conference in Kastellum Stockholm on Kastellholm, a small castle from the 19th century that was welcoming the ships to Stockholm.

Thematically, we heard about the projects in the different sections of the department from the cult practices at Mastos in Greece representing the Classical Archaeology and Ancient history to the coin finds from Visby area representing the Numismatic section. There was also a presentation by Fredrik Johnson from the Centre for Cultural Evolution outlining ‘Modelling cultural systems’. Most talks this year were from the Section of (general and Nordic) archaeology, not forgetting those of the ATLAS project.

One of the most interesting new projects is the one led by Alison Klevnäs. Her new project ‘Interacting with the dead’ will study belief and conflict in Early Medieval Europe between 450 and 750 AD. The research will concentrate on the phenomenon of tomb disturbance in the row cemeteries. Case studies that have looked into tomb reopening have shown that this phenomenon is widely present in European row cemeteries during the Merovingian period, but not in all cemeteries. While in some cemeteries a majority of tombs may have been tampered with, in the neighbouring villages the acts of disturbance may be non-existent. The case studies have also pointed out that the removal of objects has been very selective: swords and brooches have been lifted out even if they have been in a sorry state after decomposing. There is also signs of killing objects, which opens interesting vistas for new research into belief systems in Early Medieval Europe.

Another exiting project is from Ingrid Berg who will study moving Abu Simbel. She was quite unlucky with her presentation, since the laptop used to running the PowerPoints did not recognize her external hard drive. Thus, we did not see the nice photos from the 1970s Egypt but we heard about her project to look at the transnational themes in the Swedish participation in moving the temple of Abu Simbel. This talk also brought to the surface some of the memories from our chief who remembered how some building companies were known from their participation in this UNESCO project.

Interested talks were also provided by Damien Huffer who was discussing the current state of his studies into the human remains trade, Mats Bjurström on the ballast origins of the so-called Narverød flint, Magnus Lunge on the mixed traditions of central Scandinavian rock art and Nanouschka Myrberg Burström on the shared values of the original Anglo-Saxon coins and their Scandinavian copies. Some exotic photos were presented by Dalia Pokutta who will study central Asian nomadic mobility by studying a Pazyruk cemetery and its human DNA.

The day of learning was rounded up by Jeff Love from the University Library who is part of the team to help with research data management in the Humanities and Social Sciences. After his very helpful contribution on the repositories we discussed in groups the future of these events and the suggestions for some improvements in working environment. The evening brought a traditional Swedish Christmas Dinner with fish, ham and meatballs on the restaurant ship the Kastellum has for such occasions. A pleasant surroundings for a pleasant meal.